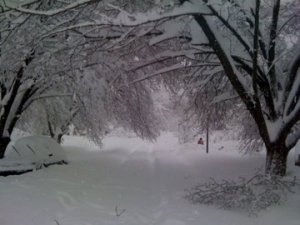 One of my coworkers and I were discussing all of the talk and preparation in the lead up to this past weekend’s blizzard, which blanketed much of the Northeast. She remarked that, the people here (in the Washington DC Metro area) were acting crazy, clearing out store shelves grabbing everything and anything they could lay their hands on as though being snowed in for a few days was more serious than the Day of Judgment, which of course, very few people actually fear much less think about and begin making preparations for it.

If we had our priorities in order, we would be preparing even more seriously for the day we will all be called to account. The day that will be equal to 50,000 years. A day when we will be swimming and some drowning in their own sweat. A day when we will be standing all alone, afraid of what we have sent forth, of our mistakes, of our sins, of our intentions (were they purely for the sake of Allah?). There will be no ties of kinship or friendship on that day, all will be standing naked. Aisha (radiy Allahu anha) asked the Prophet (sal Allahu alayhi wa sallam): “Won’t the people be looking at each other?” and he (sal Allahu alayhi wa sallam) replied, “The affair [on the day] is more severe and more serious than that.”

At Home Depot, there were only garden shovels left and the people were still snapping those up. I lost my gloves sometime last week and went to Target to try to find a new pair, I looked for the glove display only to be told by a worker that their entire inventory was sold-out. There were massive lines at grocery stores and gas stations, it looked like the aftermath of a natural disaster. All this before the first flakes of snow fell from the sky.

I’m from upstate New York where snow is just a matter of daily life in the winter. So I tend not to “freak out” over every little bit of potential snow accumulation. As a believer, I am reminded to take stock of not only if I have enough food and gas to make it through the weekend but of what I am sending forth and preparing for the real calamity. The day when the books, which omit nothing large or small are laid open and my Lord calls me to account. One of the salaf said, “Know that if Allah questions you about anything on that day, you will be punished.”