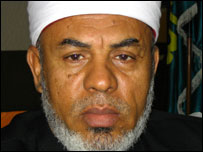 and not just on Shaykh Taj ad-Deen al-Hilali but on other irresponsible imams and Muslims in general that make outrageous and inflammatory comments.

The explanation and apology. Al-Hilali like the Pope has apologized not so much for his words which of course he says have been taken out of context but for the reactions of others to his words. Apparently, the resulting stress due to the uproar over his comments has left him confined to his bed on a ventilator. And we ask Allah to restore his health.

Alhamdulillah, I have always been protected in never having to hear first hand such ridiculous and offensive comments while attending lectures.

A few years ago, at one local masjid two speakers made some offensive statements about women, something about women’s behavior in the masjid and another about how in paradise there will be no women because everyone will take on the male form and he even resorted to some pseudo-science about the x and y chromosomes to back it up. Needless to say, the community led by the sisters raised their complaints and both were publicly censured and banned from speaking on the minbar.

Then there are the nincompoops from groups like al-Muhajiroun or whatever their name is now that are desperately seeking celebrity and seem more concerned with competing for airtime with the most outrageous statements than in trying to exemplify the manners and character of the Prophet sal Allahu alayhi wa sallam as seen in his letters and agreements with non-Muslims specifically with the Jews and Christians.

The media is complicit in this vicious circle. The more outrageous the comment the more airtime it gets and the more people ask where are the moderate Muslims. When Muslims condemn injustice and terrorism and speak in a sensible, reasoned, and logical fashion they get no airtime in the media or get detained at the airport and have their visas revoked on grounds of “national security”.

I remember sitting with my sister who is not Muslim while CNN was on and a journalist was interviewing British Muslims to find out “why they are so angry”. And one guy ostensibly the average bearded young Muslim surrounded by a group of other Muslims said that “Islam does not teach us to turn the other cheek, it says if you lay a hand on me, I’ll send ya to the cemetery”.

And in my mind, I’m thinking about all the examples of the Prophet sal Allahu alayhi wa sallam returning harshness with gentleness and the ayat about any eye for an eye but forgiveness is better, and to not transgress in our responses.

My sister, on the other hand started laughing and said, “that’s not good press for you guys”.

Which brings me to another point about foreign-born imams in western countries many (not all) of whom just don’t get it. They do not understand the people who were born in the country they have chosen to settle in, they look at us through the prism of their home country, dis(respect) their current country, and in my opinion would be better off going back to their home country permanently. Yes, I said it, Go Home.

Which is another reason why I am heartened to see the leadership in large Muslims organizations like ISNA slowly moving from the generation of foreign-born heavily accented immigrants to Muslims that were born in the country that they reside in and represent.

I am not dissing immigrants in general because my parents are immigrants and I believe in having a very open and pragmatic immigration policy. But I am dissing those immigrants who come to a country and have nothing good to say about it, all the while praising their idealised pristine home country. If it was so good back there, why remain here? These are the same people who would exert their utmost effort to remain here if the government tried to deport them.

Side Note: The dictionary definition of the word nincompoop is a foolish or stupid person. And while I do not like insults on my site I think this an apt description of these people from Al-Muahjiroun/Al-Ghuraba/The Saved Sect.

Update #2 – Shaykh Hilili came to Australia on a tourist visa and remained in Australia after his visa expired. He and his supporters fought against his deportation to Egypt and he has been allowed to remain in Australia permanently.

Update #3 – Highly selective comments by Hilali. His command of the English language is not the best but I like the ones about deportation and the Axis of Evil i.e. Bush, Blair, and Howard.

Update #4 – Is One Offensive Cleric More Important than 38 Reasonable Ones?