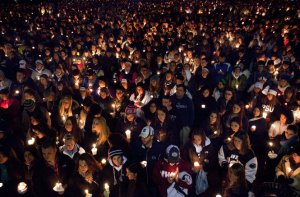 The unfolding scandal amid allegations of sexual abuse involving a former Penn State coaching assistant has led as it should to a number of resignations and terminations. The biggest names to go are Joe Paterno, the long-serving Nittany Lions football coach and the university’s president.

Sexual abuse is devastating not only for the victims but also for their loved ones. Many commentators observing the scandal from afar are shaking their heads in disbelief at how so many people could witness abuse or receive reports about it and not act more forcefully to protect and seek justice for the victims. The story is shocking and should be as President Obama suggested a cause of much “soul-searching.”

However, in addition to personal culpability, I’m inclined to believe that there are elements of corporate/team culture, which negatively impact the natural impulse to report or challenge wrongdoing. Fear of losing one’s job or income potential can be a powerful silencing motivator.

At one former job, I informally overhead some of my colleagues discussing an incident, which occurred several years earlier, before I began working there. The description, which as far as I can tell only happened once, might make one suspect that a vulnerable individual had been sexually abused.

I believe the staff narrating the incident reported it, as in the Penn State case, to their immediate supervisor. I do not know if any further action was taken at that time. But it does not appear that a report was made to either Adult Protective Services or to the police.

When I first heard the story, several years later, I was shocked and honestly did not know how to follow-up on the report. There was no direct evidence that abuse had occurred, the vulnerable individual and possible victim could not be interviewed, and there seemed to be a lack of clearly communicated agency protocol detailing the reporting of such incidents.

I have a deep respect for many of my former colleagues as they are among the most hard-working, dedicated, and caring individuals I know. They have a sincere love and concern for the welfare and well being of the people they serve and would want to protect them from harm. I say this not to excuse anyone’s actions, least of all my own, but to humanize people with very real lives and emotions put in difficult situations at work. The best way forward is not always clear.

The Penn State assistant coach who testified before a grand jury to witnessing the rape of a young boy has been threatened and vilified for not doing more to intervene. It’s very easy to claim to know how you would react if put in a similar situation. I’m sure we’d all like to think we would be the first one to stand up and jump in to intervene but I reckon some of us might respond the way the then graduate assistant coach did. If we’re honest, we must admit that we cannot know how we will react until faced with a similar situation ourselves. Others also saw or received the firsthand accounts of abuse and few seemed to act in a way we all hope we ourselves and others would act to protect these children from a sexual predator.

My colleagues reported their observations to their supervisor at the time and the situation did not progress further. My memory is hazy but I think I may have asked my supervisors for their guidance and ultimately a course was decided, which would require that I take the initiative to report the suspected abuse.

Speaking on behalf of the potential victim, I informed a healthcare provider who as a mandated reporter, immediately responded by initiating a call to file a report with Adult Protective Services. The call was made right there while we were in the examination room. My name and contact information were given and it felt awkward to be the source of information for the report. But overshadowing the awkwardness of the situation was a sense of relief that perhaps now a proper investigation into the situation would be conducted. And if the abuse could be substantiated, the potential victim would be protected.

Immediately, I alerted my supervisors to the situation, which set off a flurry of interviews and meetings on how best to respond. I told and re-told the story several times and one of my supervisors as a mandated reporter expressed her disbelief that the staff were unaware of the agency protocol for reporting suspected abuse. At times, I felt like I was on trial for reporting the situation, which happened years before I was even hired there but I tried to keep my focus on the bigger picture, which was the protection of a vulnerable individual.

Even though it’s sad and devastating, it’s not surprising to me that more people do not come forward with such sensitive reports. The workplace environment and climate can either encourage or hinder reporting. When people feel their livelihood may be put in jeopardy or they will be attacked for being a whistleblower, the desire to come forward and follow through on reports is markedly decreased. This is the reason why we need whistleblower protection laws on the books. And even these protections may not be enough to prevent the blowback from affecting you.

I used to wonder how some corporate trial lawyers could sleep at night defending clients they know are guilty of terrible crimes on a massive scale like in the Erin Brockovich film or in other class action lawsuits. I used to think these people were the personification of evil in a suit like some politicians. But a recent incident at work has led to me reevaluate my opinion.

On a very cold night, a former client showed up at my work, seeking a place to spend the night. He came inside and as I was the only one working that night he told me he had no place to go and that this was his first night being homeless. He asked if he could spend the night in a spare room. Immediately, I remembered a conversation I had with my supervisor, months earlier, that he once had to tell a former client in a similar situation that he couldn’t stay during a winter snowstorm. I called one of my colleagues for guidance and he reiterated the same message that the guy couldn’t stay there for the night.

So I told the client this and he asked if he could use the phone and computer to find someone who he could stay with, which wasn’t a problem for me. But he couldn’t find anyone to help him. He asked me if I knew of any shelters in the area but the only shelters I know about are the ones where I volunteer my time. Neither of which was close to my work and at that late hour, it was past 10 or 11pm, most likely wouldn’t accept a new person for the night. I then searched online for shelters in the area but most required a referral from a social service agency for placement or check-in by late afternoon.

After exhausting my search options, I suggested a motel but he had no money for a motel. I then suggested local churches but it seems he may have exhausted their help as well and most were closed for the night. I didn’t know what else to suggest as that empty extra room where he could have spent the night beckoned to my conscience. Should I obey the policy or should I break the policy and let him spend the night? It was possible that I could potentially have let him spend the night and then ask him to leave in the morning before I got off shift.

But would that have been the moral and ethical thing to do? Honestly, I am still grappling with the ethics and morality of either choice. In the end, sidestepping the question of morality for a moment, I enforced the policy. I said, I’m sorry but you can’t stay and used the policy as an easy scapegoat. So he left and I saw him walking around the neighborhood in the cold for several hours that night. We even walked together for a bit as he told me of his troubles, which led to his homelessness.

He returned later that night, perhaps hoping for a reprieve, but I did not let him stay and once again verbally pushed him back out into the cold dark streets. He asked a final time, if I knew where he could go, and I shamefully offered, “Maybe a park?” He looked at me in disbelief and said, “A park?” I know, it was a pretty awful suggestion and I felt bad for saying it. In addition to being cold that night, the grass was also damp. Maybe, there’s a park bench or a busstop?

I offered to give him a ride to the church that had been helping him when it re-opened early the next morning but he didn’t return. I felt pretty crummy afterward even if I could try to justify enforcing the policy as the moral decision. Can a policy, which does not seem to take into consideration the desperate human being standing in front of you with no place to go on a cold damp night, be moral?

Maybe, I could justify my actions by saying, that I’m only a caretaker working here so I can’t just invite or allow strangers to stay on someone else’s property. Maybe, I chose the correct ethical decision but it still feels crummy. But now, I have a bit more empathy for those trial lawyers who claim they are just doing their job defending the indefensible actions of corporations at the expense of innocent victims. A failure to report or follow-up on a report of sexual abuse is inexcusable, and yes perhaps you should lose your job for that, but vilifying is too easy and misses the complexity of that unknown variable of human reaction and emotion.