Skip to content
The New York Times: Why Yasir Qadhi Wants to Talk About Jihad 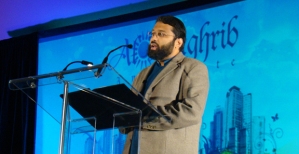 Disclaimer: I am quoted in this article.

Andrea Elliott has written a revealing profile of Yasir Qadhi, an influential teacher and imam amongst some conservative western Muslims. Overall, I think Elliott offers the reader a fascinating window and insight into a little known and much maligned segment of the Muslim community, however, the repeated references to Salafiya seem to have missed the mark.

…But Qadhi had another life. Beyond the gothic confines of Yale, he was becoming one of the most influential conservative clerics in American Islam, drawing a tide of followers in the fundamentalist movement known as Salafiya…

I’ve never been fond of the word “cleric” and have become even less so after reading it repeatedly throughout this article. While a cleric may rightly be defined as “any religious leader ” it seems that word is most often reserved for Muslim imams, leaders, and religious activists. Later on, more neutral terms like “theologian”  and “preacher” are used, “Arguably few American theologians are better positioned to offer an authoritative rebuttal of extremist ideology.”

I will concede that I don’t see much difference in aqidah (theology), fiqh (jurisprudence), and methodology between those who would like to be called Salafi, orthodox, or conservative. However, within many Muslim circles, the Salafi label is viewed in an exceedingly negative light and has been for quite some time. While many conservative Muslims proudly assert their claims to orthodoxy and to following the ways of the salaf, the earliest generations of Islam, due to the excesses of the Salafi movement, many reject the label Salafi for themselves. Today, the few that do still claim the Salafi title for themselves have a tendency to view people like Yasir Qadhi with his ever-evolving views (evolution, in this sense, is a good thing) as having sold-out or gone astray from the straight path of Islam. An Islam largely informed by the historical political, religious, and social mores of Saudi Arabia.

A more accurate assessment might be that Qadhi draws followers from a diverse group of largely conservative Western Muslims. His story is like so many of ours, the child of immigrants, to whom much was given and much was expected, having come of age  trying to find a balance between the competing forces of our fiercely Western and our parents’ back home identities. Fluent in the vernacular of Westerners, with a sharp and critical mind, and an engaging and lucid manner of speaking, writing, and teaching, it’s easy to love his work. I still remember the first time I heard a Yasir Qadhi lecture. A friend had given me his The Story of Ifk about the slander of Aisha and I was immediately drawn into the story, captivated, I listened to all four parts. Not only did Qadhi have flawless English, a sometimes rare but important quality but he told the story with such detail and intensity that one could not help but be moved. Afterward, I remember asking my friend for the name of the speaker so I could find more of his lectures online.

In the basement of the religious-studies building, Qadhi settled into an empty room, flipped open his MacBook Pro (encased in Islamic apple green) and dialed in to an Internet conference call with more than 150 of his AlMaghrib students. “I want to be very frank here,” Qadhi said, his voice tight with exasperation. “Do you really, really think that blowing up a plane is Islamic? I mean, ask yourself this.”

Islamic apple green? C’mon, it’s just a green case. I have a blue one, one of my friends has a green one, nothing Islamic or religious about it but interesting detail with a picture amongst the interactive features. I do appreciate Qadhi’s candor and frankness, it’s refreshing and somewhat of a rarity amongst such high-profile personalities. This candor probably makes him uniquely suited for his Like a Garment series about sexual intimacy within marriage but I still don’t fully understand the knowledge deficits that must exist within the Muslim community to make people pay money to learn from Yasir Qadhi about how to have sex.

Elliott is on the mark about those who seek to engage in violent forms of jihad or terrorism,”Their motivations differ, but the vast majority share two key attributes: a deep disdain for American foreign policy and an ideology rooted in Salafiya.”

This is such a central issue, both foreign policy and certain understandings and interpretations of Islam. For so long many have been content to espouse an ultra-conservative and largely intolerant form of Islam, which in its milder manifestations might simply make one’s family and neighbors uncomfortable. Issues from holidays to shaking hands with the opposite gender  to clothing choices and beard length. But rooted within the same methodology of looking towards the example of the earliest Muslims and coupling faith with action, one turn to the far right and you end up with the murderous ends justifying the means of Anwar al-Awlaki and a turn to the left gives us Yasir Qadhi with his nonviolent pacifist at all costs message.

To speak out honestly about the realities of jihad within Islamic texts is as Qadhi often notes is to invite undue scrutiny and harm to oneself and one’s efforts. The case of Ali al-Timimi sentenced to life in prison for allegedly inciting some of his followers to train and fight overseas provides a recent and chilling example of this principle. I can’t blame Qadhi or Abu Eesa Niamatullah also mentioned in the article for declining to speak openly about these issues. They have families, if they go to jail, who would take care of their wives and children, certainly not those calling them timid sell-outs, and we as Western Muslims would be further impoverished by a lack of authentically Western Muslim voices learned and grounded in a more orthodox understanding of Islamic tradition.

“If any Muslim is oppressed anywhere, the prevailing wisdom is that we should be standing up to help them — if we’re true believers,” says Ify Okoye, an AlMaghrib volunteer from Beltsville, Md. Sometimes, she added, “you feel guilty for living here.”

There was a time where I may have felt confused and guilt-tripped by some Muslims about my American identity. Thankfully, those days are long gone. I don’t feel guilty for living in America nor do I feel a need to justify my presence here in the land of my birth to anyone nor am I inclined to think making hijrah to some land overseas would be better for my faith or my well-being. In one of his video messages, Awlaki tries to make American Muslims feel guilty for living here. Elliott writes:

But alienation has many faces. America’s youngest Muslims have grown up in a newly hostile country, with mounting opposition to the construction of mosques, a national movement seeking to ban courts from consulting shariah, or Islamic law, and rising hate crimes against Muslims. While some young Muslims have sought distance, abandoning Islam and even changing their names, others have experienced a spiritual awakening. The most conservative have found a home in Salafiya.

Good, except for the very last word. Perhaps, I would have preferred “…have found a home in a return to orthodoxy.” Factually correct, it may be, but just so distasteful to keep mentioning Salafiya. How many of these conservative Muslims would identify with the Salafi movement – probably only a few.

Qadhi’s evolution in thought and beliefs from Medina University to Yale to the present, becoming more moderate, progressive (in the most conservative sense of the word), and forward thinking mirrors a similar evolution of thought experienced by many conservative Muslims including myself. I think it’s only natural and a part of one’s individual growth that our views today are not be the same as they were ten years ago or will be ten years from now.

For Qadhi, the Koran remained the unequivocal word of God. But he began to think more critically about the “man-made” canon that informed Islamic theology. So much of Qadhi’s intransigence — especially toward other Muslim sects — was based on the view that his tradition was divinely ordained. He came to see Salafiya as yet another “human development” that was handed down over generations and therefore subject to imperfection. “I realized that, in many issues, only God knows the ultimate truth,” he says.

An important realization that helps put ideas and varied understandings of Islam in context. Hopefully, with knowledge comes greater humility and tolerance for other ideas and for our fellow human beings.