Driving one morning on my way to work, I passed by a local masjid and could see that it has been vandalized. I felt gutted and could not believe what I was seeing. The masjid called the Muslim Community Center had the word “Muslim” crossed out and there were some other markings and a Star of David drawn on an outer fence wall in black spray paint. 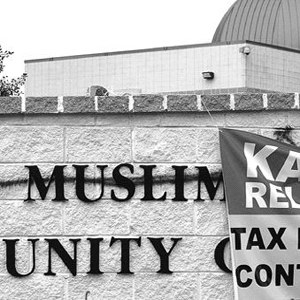 By the time, I returned a little before the Friday prayer service the sign that had been posted on the fence asking for donations for the Hurricane Katrina relief effort had been moved to cover up as much of the graffiti as possible but the line was still visible. Later on that weekend, much of the graffiti had been removed and all that remained when I returned on my daily commute the following Monday was a faint barely visible line through the word Muslim.

Which brings me to my point, I didn’t hear any non-Muslims condemn this act or see them demonstrating in the streets against this criminal activity.

I am disgusted with the incessant calls from politicians, talking heads in the media, and other individuals asking for Muslims to condemn or apologize for every single criminal act committed by any group or individual that has the remotest connection to Islam.

I refuse to play the condemnation game whereby Muslims are required to condemn every single act perpetrated by criminal elements whose only link to the majority of Muslims is that we may share the same faith.

Islam is a universal religion with more than a billion adherents. In Islam, each individual is responsible for his or her own actions. On the Day of Judgment, we will only be questioned about the actions we as individuals performed and not about the actions of others.

I refuse to apologize for 9/11 because I had nothing to do with it and wasn’t even a Muslim back then nor do I apologize for the actions of the Bush administration because I am an American even though I didn’t vote for him.

I don’t expect non-Muslims to condemn the vandalism of this masjid because I know that the individuals or group of individuals who perpetrated this act were acting on the own volition and are not good representatives of whichever faith community if any that they may ascribe to. I do not assume or take instances of people behaving badly to extrapolate that to an entire faith community.

So, maybe the next time you see or hear of an act committed by a Muslim you will not ask why are the Muslims not out in the streets protesting and condemning that act because where were you on the day the MCC was vandalized?

For more on the inherent contradiction in asking Muslim citizens to condemn acts committed by other Muslims around the world read Austrolabe’s: To Condemn or Not to Condemn.