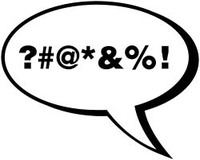 During Ramadan it’s not unusual to be up late. Last night, as I walked down the street at 2am, I could see a man approaching from the other direction. As he got a little closer I heard him shout out, “B#*ch!”

Right about then, I began to question why I was out walking alone that late and whether I should’ve turned around or made a run for it.

Then as he neared me, he shouted out in the same loud voice, “Salaam alaikum!” Relieved, I enthusiastically returned the greeting.

I suppose his earlier comment was for the person on the other end of his bluetooth ear piece and not for me, which is still a troubling thought.