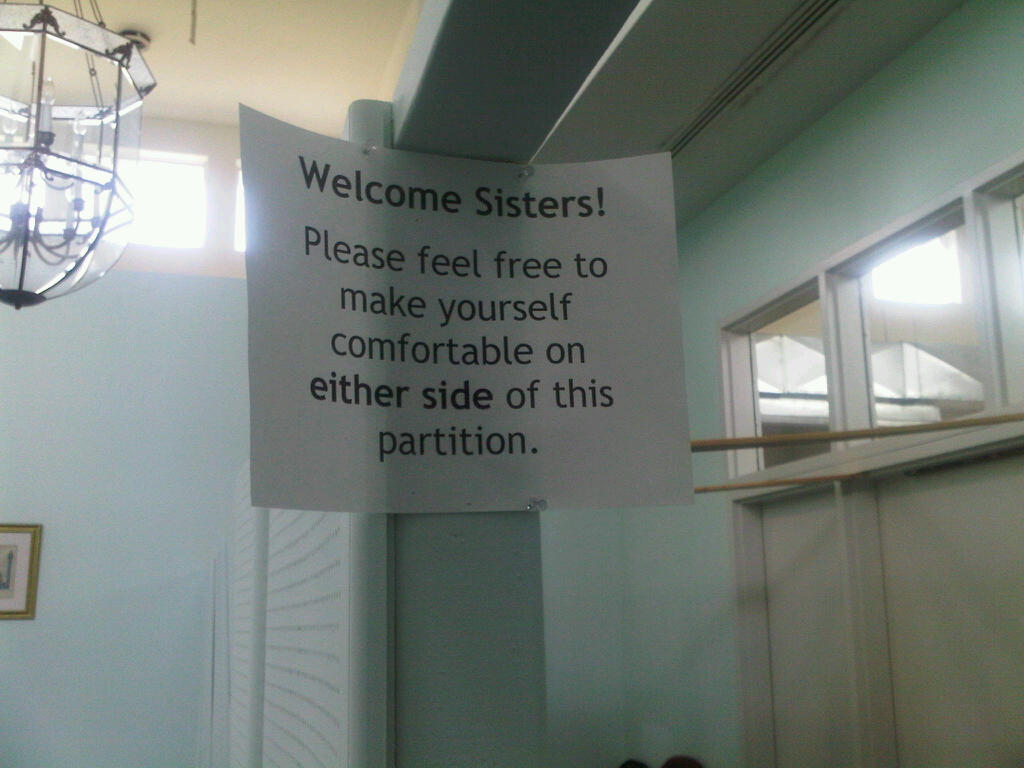 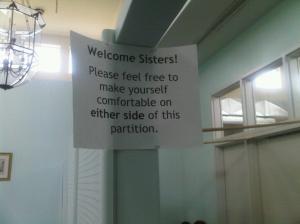 At first I was excited by this sign, thinking it was a sign of progress until I spoke to two sisters familiar with the area. Apparently, there did not used to be a barrier in the mosque and women were fully active and involved in the community. But in recent years, there has been a vocal minority pushing to have women put behind a barrier and this new partition may signal the beginning of that process. I was in Toronto last week but did not get a chance to go mosque-hopping, next time, insha’Allah. 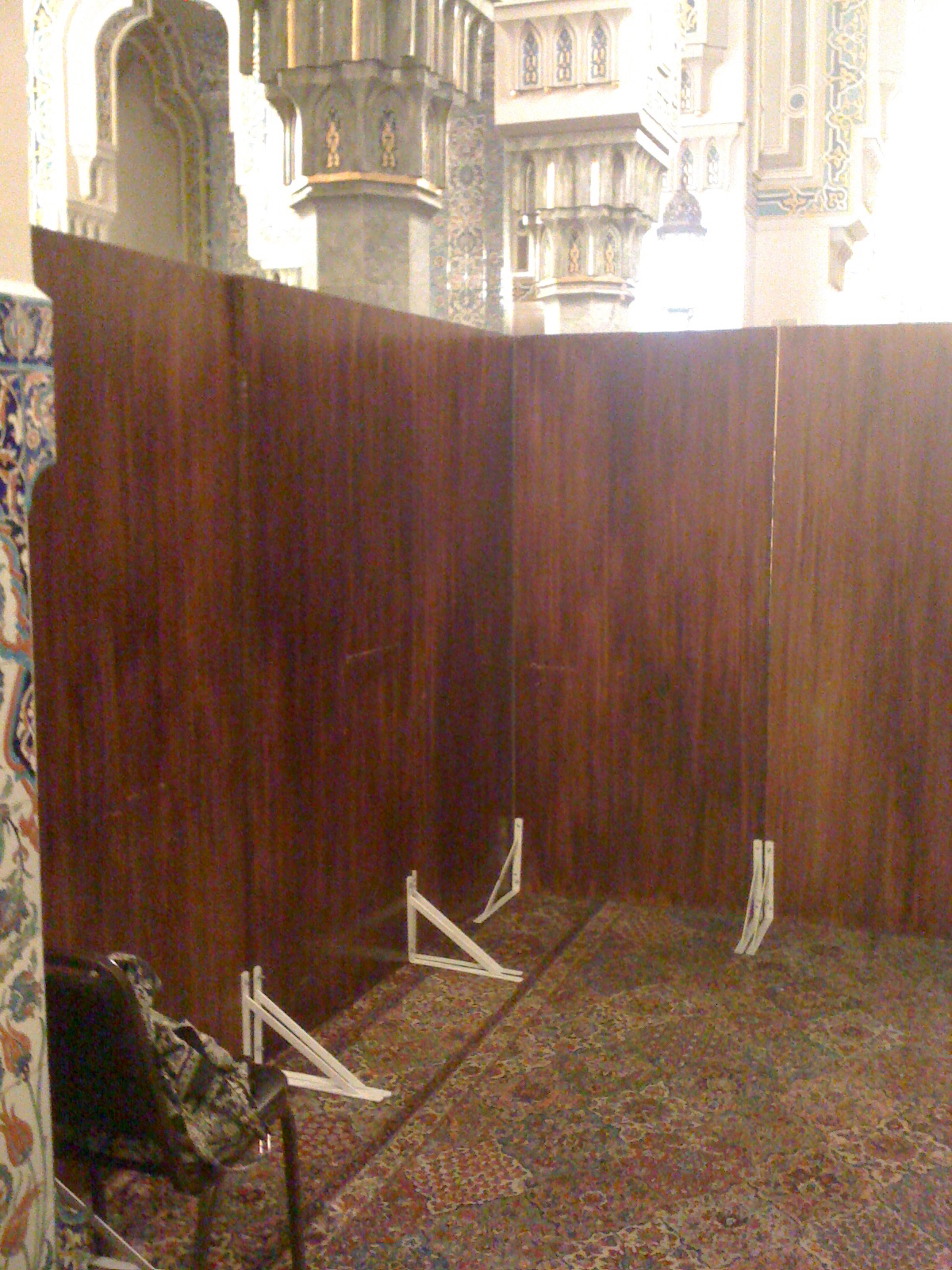 At the most recent pray-in at the Islamic Center of Washington DC, we made progress with some of the mosque officials. One male staffer held the front door open for us as we entered the main prayer hall. And when the women began to offer their sunnah prayers, the acting imam for that day defended our presence and our right to pray in the main hall outside of the “penalty box.”

The acting imam also overruled one male staffer who said he wanted to call the police to remove us. The imam mentioned the hadith referring to the best rows for the men and women to pray and told the small circle of men who had gathered around that it was none of their concern where we prayed.

It’s so inspiring how the simple act of praying can be both an act of complete submission and revolutionary. Pray-ins present a direct challenge to those who wish to keep women marginalized in the Muslim community.

In today’s USA Today, journalist and author, Asra Nomani argues that mosques and other houses of worship should lose their tax-exempt status if the discriminate based on gender. The local and federal government has already legislated non-discrimination clauses for a variety of protected classes.

Sorry for the blurry pictures, one of the mosque officials (pictured left in an orange fleece from an earlier pray-in) was harassing me to not take photos while he himself proceeded to take photos of me. He encouraged us to pray in the penalty box, which was closed off more than usual with yellow caution tape. 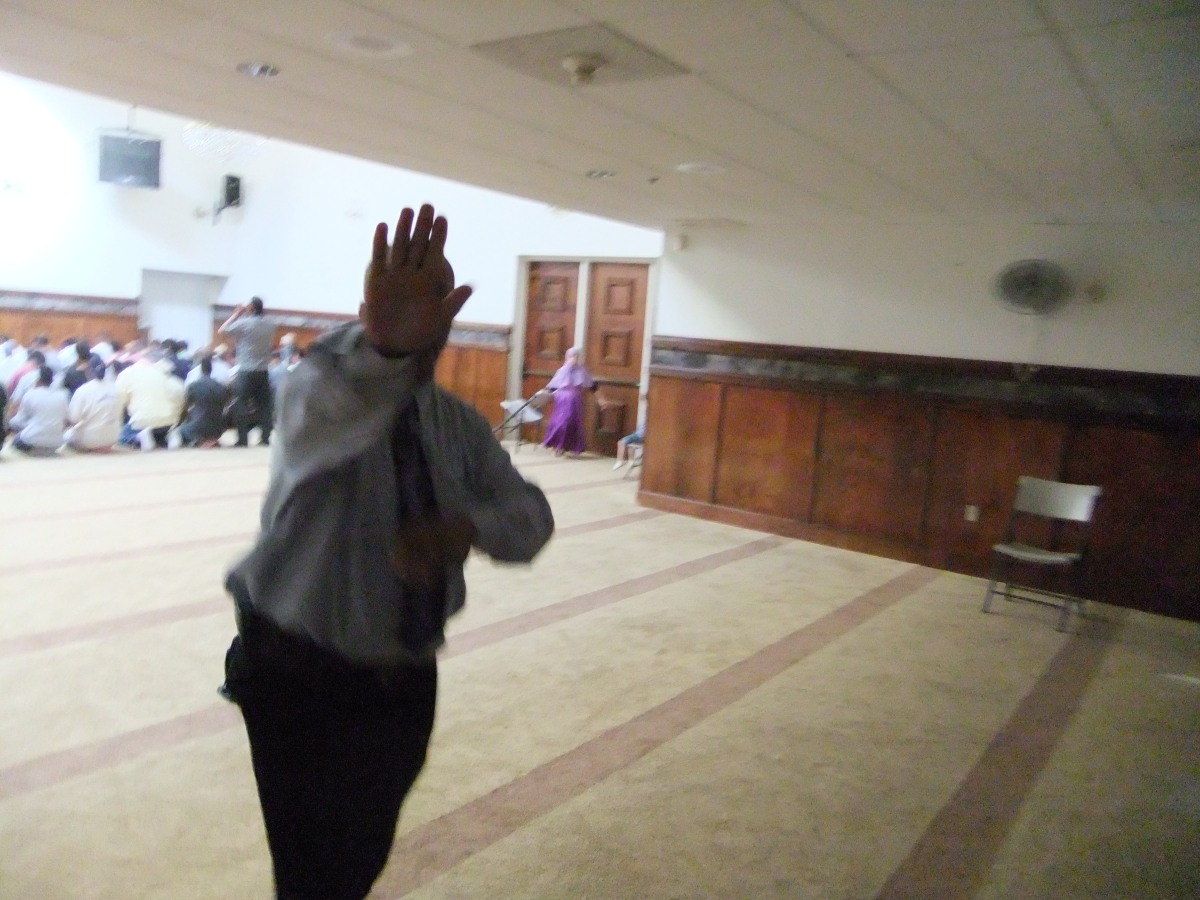 If you challenge an unjust status quo, those invested in maintaining things the way they are will attempt to silence, marginalize, and may even try to harm you through physical or verbal threats and violence. So you as an activist should try your best to prepare how to respond beforehand. Each situation is unique and it’s hard to predict how a situation will affect you but here’s some advice based on personal experience.

1. Before you undertake any action, make sure you go into a situation with correct intentions. For the religiously-inclined, saying a prayer and consulting with a spiritual advisor may be helpful.

2. If possible, go with a group, so someone can watch your back, and in case your judgment is clouded, two heads are often better than one. The Prophet (peace and blessings of Allah be upon him) said, …”three’s company.”

3. Be prepared with your technology. Smartphone, digital camera, flip videocamera, etc. Make sure you’ve charged them beforehand and have them ready to use or record at a moment’s notice so you can capture the assaulter in action, which may be useful later on to prove your case. Don’t be afraid to take their pictures or film them as they are not shy to do the same to you.

4. Always have an exit strategy. Don’t allow yourself to be cornered. If threatened, move to a more open space, preferably one with potential witnesses. Don’t be surprised if people do not offer to help you, they may have their own motivations. It’s been my experience at two separate mosques, that it is often the people who work at the mosque that are the least helpful and most likely to lie and coverup what happened to protect their colleagues and organization. I’m not generalizing this to all mosques, just my experience at two local mosques that when I sought out assistance to either find out information about my assaulter or to thank those who stood up for me that mosque officials were unhelpful.

1. Call 911 or the police and request that they come to the scene.

2. When the police arrive, if they ask you if you want to press charges, say “yes.” Sounds self-explanatory but in the immediate aftermath of an assault, so much is happening that you’re not always thinking clearly. When I was assaulted last year, the police officers asked me if I wanted to press charges and I said, “no, I don’t think so.” They pressed me if I was sure and I still declined. It was only hours later when I was at home and began to process what had transpired that my mind became clearer and I did then want to press charges against the man who attacked me. My reasoning was to send a message to those thugs that it’s not okay to assault anyone and so that they might think twice before doing that again.

3. Allow the police to gather the identifying information from the person who assaulted you and get a copy for yourself. This is crucial.

1. Well, in Virginia, you must go to the County Magistrate and fill out some forms indicating the nature of your complaint. This can be a major stumbling block because in order to file a complaint, you will need identifying material on your attacker including full name and date of birth. Yes, that’s something you might not have learned in your self defense class that in addition to shouting “Stop!” and “No!” don’t forget to say “Excuse me, can I have your full name and date of birth?” Other information that is helpful is driver’s license number or license plate number, home address, and place of work. This information tends not to be something you think about while you are being assaulted. And even if you ask for or try to obtain this information, the other party is usually not very forthcoming for obvious reasons.

How to get around this? If you know where your attacker lives or works, you can have a police officer confront the individual and obtain the information you need. In my case, I knew the man who assualted me worked at the mosque. One day after the assault I went to the mosque for Friday prayer and saw the man that assaulted me setting up orange cones, directing traffic, and opening and closing the gates to the parking lot. So after we prayed, I went over to the police officers who help direct traffic around the mosque on Fridays and explained my situation to them. They listened and one very nice officer walked back to the mosque with me and asked me to discreetly point out my attacker. The officer confronted the man and took down all the pertinent identifying information for me to use to file my complaint with the magistrate. END_OF_DOCUMENT_TOKEN_TO_BE_REPLACED

Police Officer Barry Goodwin squatted next to a woman finishing her prayers inside the Islamic Center of Washington, D.C.

He listened to her explain why she had a right to pray in the main hall of the mosque, while a mosque employee countered that she was violating the rules.

“I don’t know the rules,” Goodwin, who’d been called to the mosque by the employee, admitted to the woman and the mosque employee.

What was going on was a protest last Saturday, Feb. 20, against the center’s requirement that women pray behind an 8-feet-tall, wooden partition at the back corner of the mosque, behind the male worshippers. The protest was led by Fatima Thompson, 44, of Owings Mills, Md.