June 2016 – Tanvi Misra for @CityLab for The Atlantic: The Importance of Queer Muslim Spaces

The one place every queer Muslim person I spoke with mentioned was the LGBT Muslim retreat, which happens once a year. The three-day event brings together over 100 people of different ages, races and ethnicities, genders, abilities, and experiences with Islam. In other spaces, “we’re always having to justify, we’re always on the defensive. It’s almost like you have you put on your armor to do battle,” Okoye says. But at this retreat, there’s no hiding, explaining, or justifying who you are. “I wait impatiently for those three days to feel alive,” Munhazim says.

Known to some as “Generation 9/11,” Ms. Okoye and others set out to reclaim Islam’s image in America, but found themselves in uncharted waters…

It had been one year since the United States invaded Iraq. At the time, Ms. Okoye was working with the Transportation Security Administration, screening passengers at Baltimore’s international airport.

The job was a kind of crossroads between Islam and America. Ms. Okoye bonded with the ex-military personnel working by her side, even as she fought her supervisor for the right to wear her hijab. She was unsure of what disturbed her more: the Muslim passengers who were always pulled aside for scrutiny, or the fresh-faced soldiers who left for Iraq “walking and full of life, only to return in a wooden container smaller than a shoebox,” she recalled.

Last year, Thompson launched a “Pray In” campaign in Washington-area mosques, and this was our fourth action . With us, Ify Okoye, 27, a Nigerian-American Muslim convert, and Krysta Camp, 28, an American-Muslim convert, strode forward to reclaim in the 21st century rights that women enjoyed in the 7th century when the prophet Mohammad let women pray in the main hall of his mosque without forcing them behind any partition.

March 2011 – Andrea Elliott for The New York Times: Why Yasir Qadhi Wants to Talk About Jihad

“If any Muslim is oppressed anywhere, the prevailing wisdom is that we should be standing up to help them — if we’re true believers,” says Ify Okoye, an AlMaghrib volunteer from Beltsville, Md. Sometimes, she added, “you feel guilty for living here.”

Even absent the question of war, Western Salafis ponder their loyalties. Internet forums buzz with talk about the concept of al-walaa wal-baraa, which is rooted in Koranic verses dictating allegiance to Muslims over non-Muslims. Qadhi’s students are divided over whether to vote, pay taxes that support the military or even celebrate Thanksgiving. “These sorts of things, they are the fault lines,” says Okoye, the student from Maryland.

July 2010 – The Muslim Link: Breaking the Ranks or Peaceful Protest

Imam Safi Khan met with Ify Okoye, a Pray-In member who lives close to Dar-us-Salaam and often attends his Friday khutbah. Okoye called for the meeting, asking about the prayer arrangement for women at Dar-us-Salaam. A revert Muslimah like Thompson, Okoye said it’s “bad da’wah” when she brings her female non-Muslim relatives to the masjid and they discover women pray behind a partition.

May 2010 – The Washington Post: Mosque Pray-ins Against Segregation of Sexes Are Springing Up 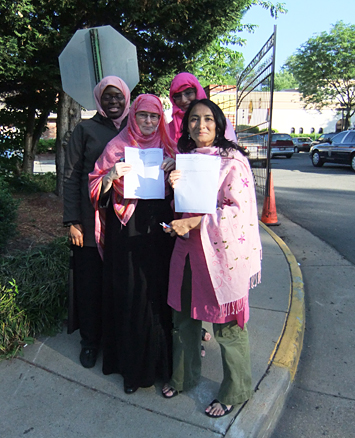 At the protest last Saturday, there was a tense scuffle when three men approached a protester (me) videotaping the scene.

The Daily Beast: Showdown at the Mosque

Before the last prostration, shouting broke out behind us and a group of men, including the mosque’s head of security, yelled at one of the women from our group, Ify Okoye, a Nigerian-American convert. They pushed her and she fled the main hall, worried about her safety. (Not long ago, Okoye courageously wrote a blog post protesting the “penalty box” behind which women are expected to pray at the Islamic Center of Washington.)

Asra Nomani for The Daily Beast: Let These Women Pray!

Ironically, the weekend incident raises an important question about whether there truly is suffrage for Muslim women in America. It seems not.

Even conservative Muslim women are chafing. Recently, Ify Okoye, a Nigerian-American convert, wrote an article, “The Penalty Box: Muslim Women’s Prayer Spaces” on a mostly hard-line Web site, complaining about the separate and unequal space women get at most mosques.

October 2009 – Matthew Hay Brown for The Baltimore Sun: Muslims Gather for a Weekend of Learning about their Faith at Convention Center

An adult convert to Islam, Ify Okoye spent her first couple of years learning about the religion from books. It wasn’t until the Beltsville woman started going to seminars given by the AlMaghrib Institute that she really began to understand her new faith.

“I look at my Islam completely as the pre-AlMaghrib phase and the post-AlMaghrib phase,” says the 25-year-old Okoye, a student at Bowie State University. “After attending my first class, I see there’s such a breadth and depth to the Islamic tradition, and also a real practical intellectual tradition that’s vibrant, that can work today, that Muslims in America.